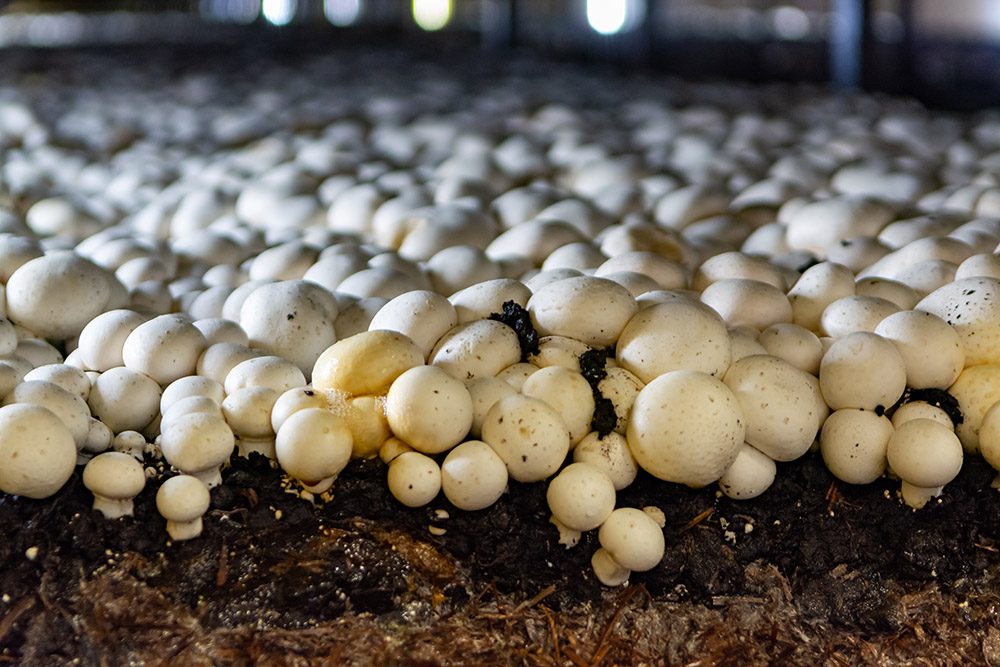 Spent mushroom compost – it’s light, easy to work with, full of nutrients, free of weeds and disease, rich in organic matter so improves soil structure and water retention. This soil improver is also reasonably priced with a one tonne bulk bag costing around £80-100. So, what’s not to like about spent mushroom compost? One word: PEAT.

Many of my gardening friends who have avoided peat over many years were horrified to learn that virtually all spent mushroom compost (SMC) contains between 10 and 15% peat. It’s a favourite of many a gardener and landscaper. Even some of the best known peatfree-gardening advocates use the stuff, tonnes of it. It’s recommended on the websites of the RHS and National Trust, organisations that have taken the peatfree route. SMC is often advertised as a peatfree product – it is not. There are very few mushroom producers in the UK that do not use peat, unless they are very small scale or they are producing specialist mushrooms such as oyster (Pleurotus), shiitake, lion’s mane and enoki that are growing on various wood-based mixes. Beware, some cap mushroom kits also use peat too.

The commercial production of mushrooms (cap and button) takes place in climate-controlled rooms. But first, the growing medium has to be carefully prepared. A mix of chopped straw and animal manure (pig, poultry or horse) is carefully composted for a couple of weeks in a tunnel, before being heat treated (pasteurised) to remove any pathogens and ammonia, and then impregnated with  mushroom spawn containing mycelium. The manure has a supply of readily available nutrients which the fungal hyphae use to fuel their growth. It’s spread over the growing beds, which can be wooden, stainless steel or aluminium shelves.

The peat is used as a casing. A layer of peat, often mixed with gypsum to ensure an alkaline pH, goes on top of the manure mix. The casing is permeable to air and water and maintains a moist environment, which is essential to mushroom growth. The peat can also withstand the regular irrigation (about 2 litres per square metre 4 times a day) without losing structure. Fruiting starts after 18-21 days and there will be around 3 flushes of mushrooms over the next 20 days. Once mushroom production has stopped, the compost needs replacing. The old compost is steam pasteurised to kill pathogens and any remaining mushroom spawn, then removed from the growing room and sold on to various end users.

A casing needs to be easy to handle, free of pests and disease, of consistent quality, with a guaranteed supply and, of course, competitively priced. During the 1990s when concerns over the use of peat were first recognised, the industry searched for alternatives. Over the last 25 years, a wide variety of alternatives have been tested; mineral, plant-based and synthetic, but none has proved to be as effective a casing as peat. For mushroom producers, peat is the best material available, hence its use continues.

Back in the early 2000s Professor Ralph Noble and colleagues at the Horticultural Resource Institute at University of Warwick researched alternative casings. Amongst the most promising were wastes from coal mines and quarries, these fine waste materials were difficult to dispose of as they were unstable in landfill.  In 2004, Professor Noble published his research findings that these wastes could replace up to 30% of the peat without any noticeable loss of yield or quality. A TV programme made at the time, For Peat’s Sake, interviewed Professor Noble who said: “We’ve been looking for alternatives to peat for mushroom casing for probably around 12 years now.  The difficulty is finding materials that are sufficiently cheap and hold a lot of water rather like peat. The material that we found probably four or five years ago is a waste that’s produced from the mining and quarrying industries. In the coal mining industry it’s referred to as “multi-roll filter cake” and this is a black sludge material that holds a lot of water. You can see here, it’s like a black jelly. This material’s very difficult to dispose of as it stays as a jelly, but for our purposes it’s suitable as it holds a lot of water”.

In 2002, the National Trust went peat free. Hanbury Hall in Worcestershire had the world’s oldest mushroom house and mushrooms were still being grown, but the ban of peat threatened this, so Professor Noble came up with an alternative of 70% bark with 30% coal waste, in order that mushroom production could continue. However, mushroom production now longer takes place.

How much peat is used?

Finding statistics on the use of peat by the mushroom industry is tricky. In 2004, Defra quoted 100,000 cubic metres of peat a year. Mushroom production in the UK has increased since then, but mushrooms are also imported, so it’s possible the level is much the same. In an interview with Radio 4’s Farming Today on 7 November, the manager at G’s mushroom production unit in Lincolnshire said they were using 240 tonnes a week!!

From these figures we can estimate just how much peat is used to produce a kilo of mushrooms.  I have assumed 10% peat, the lower estimate. Using the Defra figures, for every kilo of fresh mushrooms, 400g of peat was used its production. Is this an accurate representation? I think so. A survey of scientific and horticultural papers looking at commercial mushroom production, indicates that there is around 5 kg of SMC for every kilo of mushrooms produced at the end of every production cycle (https://www.hindawi.com/journals/tswj/2013/258562/).

Are there any alternatives? China is the world’s biggest world producer of fresh mushrooms. More than 4 million tonnes of SMC are produced annually, which are typically dumped in landfill or burnt. In Holland, SMC is spread on fields. However, these countries do not have peatlands to dig up, so peat is imported and that is expensive. To keep costs down, they have been looking at using steam-treated SMC as a casing. Initial research found that 100% sterile SMC boosted the dry matter of mushrooms, but reduced yield. In Iran, a mushroom producer has found that blending 30% imported peat with sterile SMC improves water holding and structure and, interestingly, they claim that this mix produces the best quality mushrooms with a small loss of yield.

What are the alternatives for gardeners?

So, if you cant use SMC on ethical grounds, what can you use as a soil improver instead? Soil improvers provide nutrients, help to break up clay soils, improve plant growth and water retention and can act as a surface mulch. They tend to have a high level of nutrients, so they are ideal for boosting a soil that has been run down and needs improvement. This is achieved by spreading a by thin layer over the soil, but these materials are be too strong to be used as a potting medium or seed compost.

One option is digestate. This is the stuff that is left in biodigesters after the biogas has been drawn off. Biodigesters use a variety of materials, from cattle slurry, waste food and biofuel crops, such as maize. The material is digested anaerobically (without oxygen) and the biogas is drawn off to use as a fuel. The waste is friable, clean and not smelly!  Its a nutrient-rich material that is already widely used as a soil improver.

Another option which is cost effective is green waste. This the garden waste collected from households and composted on a large scale to strict guidelines. Temperatures are controlled, so that pests, disease and weed seeds are killed off. It’s widely used as a soil improver and it can be purchased in bags or bulk. It costs around £50-70 per tonne.

Going forwards, gardening organisations, celebrity gardeners and garden writers need to revise their advice about SMC – it is not a sustainable medium that should be going on our gardens. Peat needs to stay in the ground and the mushroom producers need to look at the alternatives.  They hide behind worthless statements of only using peat from degraded sites, but in reality most of it comes from the pristine peatlands of Latvia, Estonia and Lithuania.

If we care about peat and our environment, we shouldn’t be eating button / cap mushrooms that are produced using peat and gardeners shouldn’t be using SMC on their soil.

One thought on “What’s wrong with spent mushroom compost?”