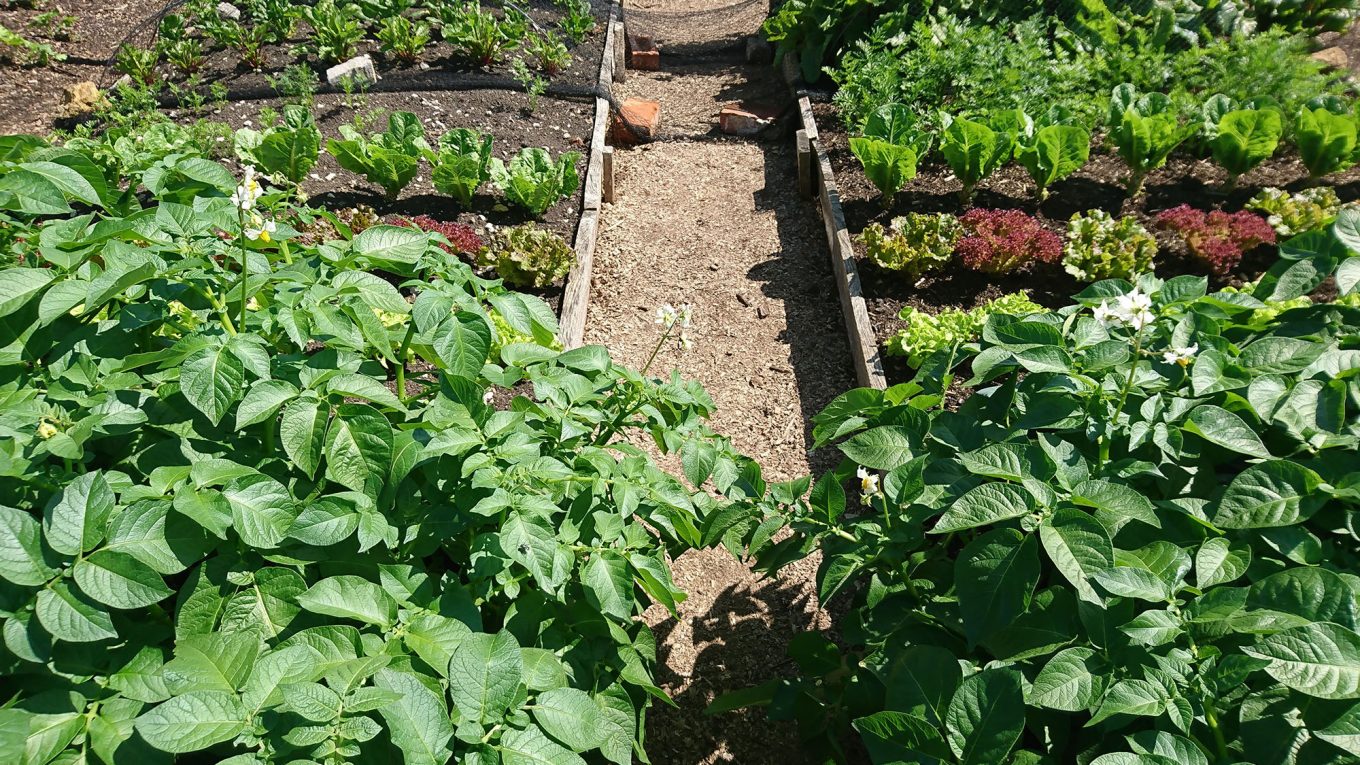 Last week I popped along to the #NGS open day at Homeacres – Charles Dowding’s no dig garden in Somerset. I have visited before but not at this time of year, so it was good to see the beds early in the season.  It was a lovely sunny day and the constant stream of visitors kept Charles and Stephanie very busy. 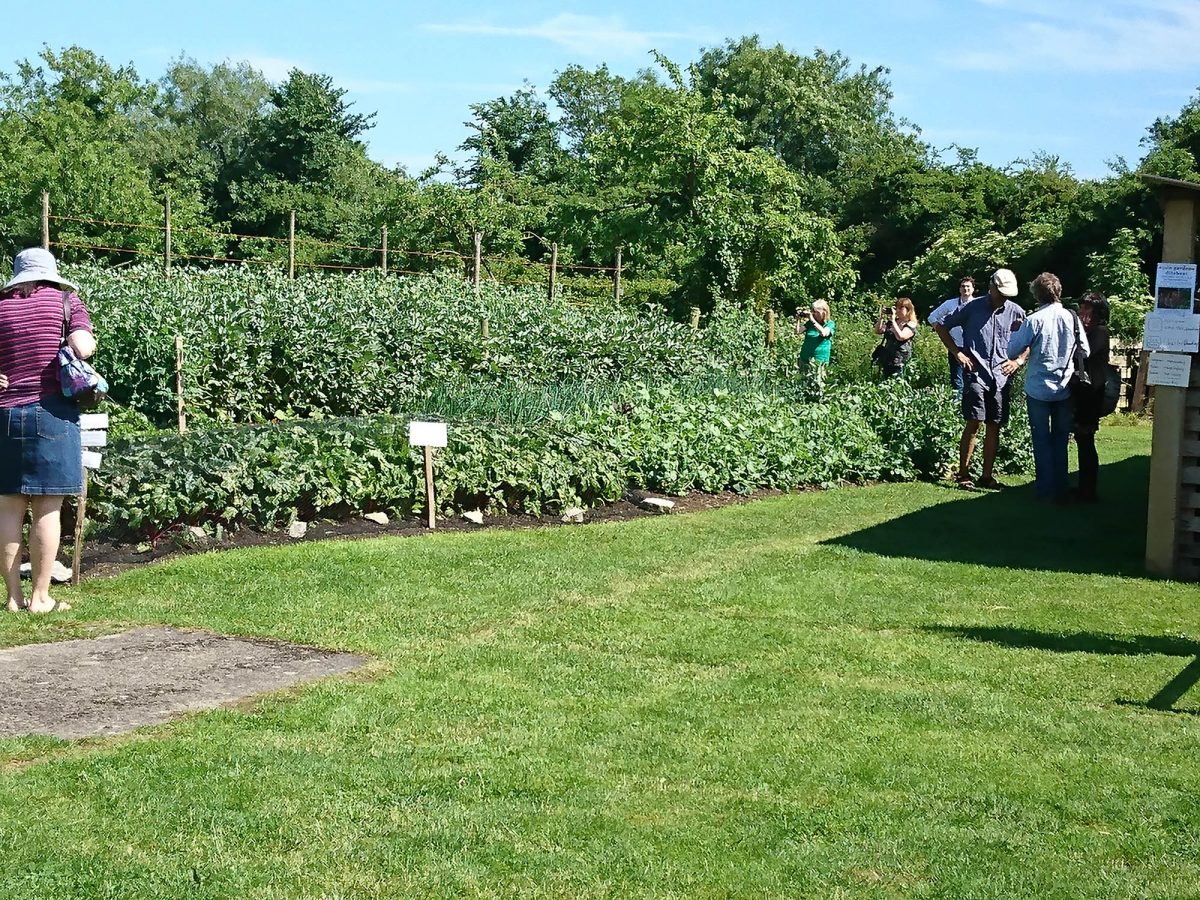 My aim this time was to look at the various trials that are underway in the garden.

Dig vs no-dig – this trial has been running since 2012  and it compares the  yield  of crops on the two beds. The 5m x 1.5m raised beds lie beside each other and have the same crops.  Each year they receive the same amount of compost. The dig bed is dug in December and  the compost is added under a single spit of soil while the no dig bed receives a top dressing of  approx 5cm of compost.  Both beds get the same sowings and plantings  and you can see from the photo that the no-dig bed looks to be slightly ahead already, although there are more crops to come. As  the early crops finish, they are removed and new crops added,  so carrot, kale, beetroot, French beans and endive are still to come.

One of my particular interests is crop rotations and if we need them. As we gain more insights into the working of the rhizosphere, it is apparent that some of our practices may be a bit out-dated. The natural agriculture approach from Japan does not use rotations  and, in fact, nothing is added to the soil – no compost, or additives and chemicals of any kind. The crops have to survive and each year seeds are saved,  the idea being that those plants best adapted to the conditions survive and set seed. Each generation becomes more adapted to the site and in time yields increase, but you also have to accept that some crops may never do well on a particular soil.

In this trial Charles has three strips: Strip 1 is forked in winter and 5 cm of  green waste /mushroom compost added on top, Strip 2 is no-dig with the same amount of compost which is added as a top dressing, and Strip 3 is no-dig with 5 cm composted cow’s manure  in winter. The crops are planted in the same place each year. Some of the crops are in their fifth season in the same beds – beans, broad beans, potato, leek, spinach and salad leaves. Interestingly, no brassicas. Horticulturalists usually recommend a long rotation for brassicas because of the risk of club root. This is a fungal disease. The fungus invades the roots, causing them to swell up and become distorted. The result is stunted growth and sometimes the death of the plant. There is no treatment, although liming and good drainage can help (the fungus likes wet, acid soils), as can the growing of club root resistant varieties. However,  once you have fungal spores, they can contaminate the soil for up to 20 years, so you really don’t want club root! But speaking with growers, club root is not that common anymore – whether that’s to do with the improved varieties,  better soil management or climate change, who knows?  Interestingly, if you have got clubroot, the advice is to grow your brassicas in the same plot each year to avoid  spreading the fungus around – so may be growing brassicas in the same plot is a good idea!

Viridor green waste (Revive) is quite dark but weed free,  so its good top dressing on garden beds.  We’re trialling it this year on the One Acre plot.  I love the story behind the Dalesfoot compost which uses wool and bracken – two materials that the producers get from their farm.  Bracken is spreading over some of the  farm’s hillsides, so cutting the fronds once a year helps to keep it under control, while the bracken itself  is potash-rich and ideal for use in compost.  The wool from their Herdwick sheep helps moisture retention and is a  source of  nitrogen. I have trialled some of the Dalesfoot composts before and was very pleased with the results, but I can’t use them on the One Acre plot as the company does not certify their compost for organic use  – really wish they did !!

And finally, an instant bed. The leftover pile of cow manure was planted with potato tubers in April

You can read more and look at loads of photos on Charles’ website www.charlesdowding.c.o.uk , subscribe to his newsletter or go on one of his many excellent courses. And if you want to see the garden the next open day is 2 September.

More to follow on mound beds and polyculture in the next blog.

One thought on “The no-dig garden”