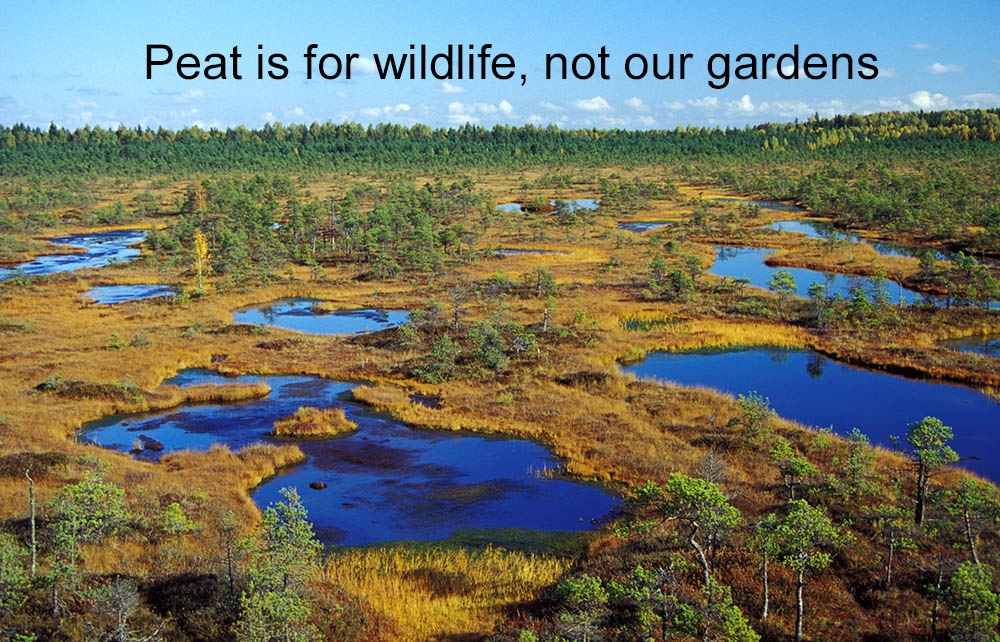 It’s April and the #peatfree campaign is off the starting blocks. It’s hard to believe how much progress has been made since September, when an exchange on Twitter resulted in a group of gardeners and garden writers coming together to campaign against the sales of peat to gardeners.

Why a campaign and why April?

It was a FB exchange with friend who said she felt that the scale of climate change  was overwhelming and the only way she could see a way forward was to focus on what she could do – in her case helping with a community fridge in London so she could reduce food waste. This got me thinking.  I had seen the peat programme on ITV about the way that it was still being dug up  despite the fact that the government had asked for a voluntary ban on peat for sale to the amateur garden market in 2020, so there was no hope of that being actioned, with peatfree sales barely 17% of the total sales of grow media. The peatfree campaign was a way for me to do something positive about climate change. And fortunately, I was not alone. Many gardeners and garden writers feel the same.

The @PeatfreeApril campaign is organised by a group of gardeners and writers –  we’re not a charity, we have no money to spend on websites and ads. We are volunteers and in our spare time we are using social media to build up awareness and to get gardeners talking about peat and how to avoid it. Its urgent that we stop using it – for climate change, conservation, biodiversity, flood prevention and more.

The campaign is focussed on telling gardeners about peat as so many people tell us that they are unaware that there is peat in the compost they buy. They need to stop buying it – to go peatfree.

I think peatland habitats are fabulous. While at university, I spend many days at Wicken Fen carrying out plant surveys and research projects.

I live in Somerset now and I cannot believe that just 20 miles from me on the Somerset Levels, peat is still being dug up for use in horticulture. These fabulous habitats are ripped up just so that we can have peat for the garden.  It is unbelievable that this is still happening in the UK, Ireland and eastern Europe, Canada and elsewhere. And its not just the wildlife losses that are important, these habitats sequester vast amounts of carbon and they hold onto water, so in many places they reduce the risk of flooding.  And now the government has agreed to spend many millions of pounds restoring them, so in one part of the country companies are digging it up under old extraction licences, while elsewhere we are restoring the damage. Are we mad?

So, for me not using peat is an ethical decision. Peat should stay in the ground.  There is absolutely no reason to use it in the garden. Peat has only been used in the garden since the 1960s, before that generations of gardeners managed quite happily without it and we can manage now. We just need to throw out the ‘rule book’ and we need some of the better-known gardeners who seem stuck in their old ways to realise that peat has had its day. It is simply not right to use it.  There are plenty of excellent alternatives.

As a young gardener I was a fan of Geoff Hamilton. I still remember him telling us not to use peat and I have followed his advice ever since. Fortunately, Monty Don and others of the Gardener’s World team follow his sage advice and are telling us to use peatfree compost.

What is #PeatFreeApril hoping to achieve?

Many gardeners tell us that they can’t buy peatfree compost in their local garden centre or superstore. The stores tell us there is no demand. Well, if they don’t stock it, there won’t be any demand!  So, we would really like gardeners to encourage every garden outlet in the country to stock peatfree compost.  The RHS and NT garden centres are already well ahead, by not stocking peat any more, so all the other garden centres are going to have to watch out. They are being left behind by the ethically-minded gardener.

I know some peatfree fans argue that some composts are not as good as another, that we should avoid the cheaper options. But for many gardeners on a budget that is not an option, if they want to make the ethical step to peatfree there has to be an option they can afford to buy and it has to be on sale widely. Once they are in a garden centre and can’t find peatfree, they are unlikely to get in their car and drive elsewhere, so will resort to buying peat options. We must stop that happening.

The reason I use peatfree is not because it is better. That sounds odd, but having never used the peat-based ones I can’t compare! I use peatfree because ethically I do not want to be responsible for the destruction of wildlife habitats. These habitats are far more important than a few seeds in my garden. Nothing is. So, if a peatfree compost doesn’t work as well, I am not going to shrug my shoulders and buy peat. I’ll look for another brand. It’s like organic food. I buy organic food because I believe in the farming system behind the food, not because it tastes better, and just because a brand doesn’t taste great doesn’t send me back to the conventional alternative. No, I look for other brands.

Also, gardeners making the switch have to be aware that they must use the peatfree composts differently. The peatfree options retain water so they don’t need as much watering, but they can look a little dry on the surface.

Most consumers make the decision to go peatfree because they care about the planet,  they want to  do something, however small, to help the climate emergency  and once they have made this decision, I can’t see them going back to use peat.  Once peat is off the shelf, then we can start debating which peatfree is better.

So the @peatfreeApril campaign is about

And one other great thing to come out of the campaign so far is the virtual friendship with many other people who feel the same way – the #peatfree community. With big, big thanks to Sara, Nic, Alice, Jake and Mark and the fellow gardeners and garden writers who have written about the campaign and supported our tweets and blogs