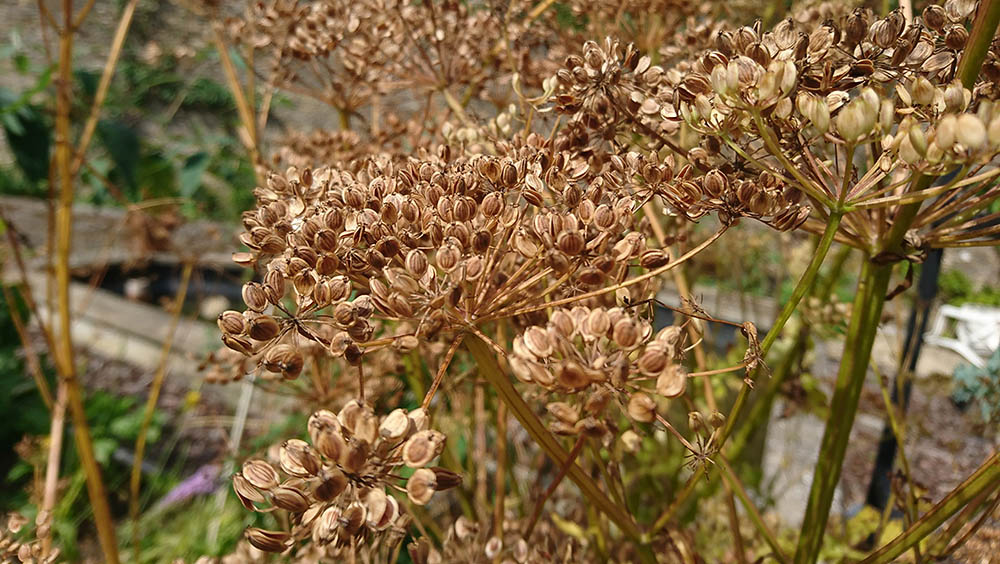 I can hear you all shouting ‘of course save seed’ and as generations of gardeners have done, I diligently save seed each year because locally-adapted seed is best – or is it?

I have saved parsnip seed for the last 10 years, with the parent generation being the open pollinated Tender and True, a heritage variety chosen for its resistance to canker. The description of Tender and True on Suttons is: “Heritage Seed Variety, 1929 packet details – An admirable parsnip which increases in popularity every year. Not quite so large as our Student, but more perfect in form, of the finest quality, with a clear and smooth skin. We consider this to be the best Parsnip in existence”.

My aim with seed saving is that in time I will develop a landrace that is adapted to the conditions under which I grow it, as I choose healthy looking plants with well grown roots, free from disease that grow well on my clay soil from which to harvest seed. I’m not breeding true (excuse the pun) but breeding for a parsnip that grows well under my local conditions and Tender and True seemed a good starting point. Being organic, I liked the fact it had some canker resistance.  However, I do get canker and always have done, although these are not used as seed plants. Did my parent seeds have any resistance in the first place? The trouble with open pollinated seed is that one seed merchant’s Tender and True may differ from another.

But as I was gathering this year’s parsnip seed, my mind wandered. I have been researching and writing about climate change gardening for a while, and I started to think about the conditions that I might be facing in coming years. Was the seed I was saving right thing for my future garden? Tender and True dates back to 1897, developed by Victorian gardeners when conditions were very different to those of today, not least because the average temperatures in the UK have risen by almost one degree C since the 1960s. With the pattern of rainfall predicted to change, from an all year round distribution to one with most of the rain falling in winter, and with intense periods of rainfall and drought, should I be looking for a parsnip that can cope with low summer rainfall and potentially higher temperatures and even drought?

Another factor that affects the taste of parsnip is cold and traditional gardening advice is to leave the roots in the ground until the first frosts so that the stored starch is turned to sugar. Well as frosts become less likely, we may be waiting a while for a hard frost.  Would another variety be better suited to a longer growing season?  So many questions.

Heritage varieties look appealing and many claim that they taste better (but this could be down to the soil) but when you read the descriptions on the Heritage Library list for example, you see that many varieties of seeds were saved from just a handful of seeds. Is their gene pool wide enough to be able to adapt?

Given that I live in Somerset, would I be better looking south for new varieties to grow that are suited to a warmer climate? Parsnips have been cultivated in Europe for 500 years, so would I be better to sow a parsnip variety from Europe, say Parsnip Bugi Bijeli from the former Yugoslavia or something just to the south of me, Parsnip Guernsey, a heritage variety from France. Maybe I should look across the Atlantic for some American varieties that are faster growing. The All-American, for example, can be harvested in 95 days, so could be sown in July and harvested in late October.  This could work as our summer extends into September and autumns get milder. But will they have resistance to disease?  More questions…

In times of environmental change, species that are flexible / adaptable do better and survive – we have seen this in ecological history, a generalist species, for example, is better at adapting than a specialist. We find that some plant species are global and can be found growing a wide variety of climates. They tend to be highly resilient and adaptable plants, while others have a highly restricted distribution and are more vulnerable to change. So, do I look for a variety of parsnip that performs well under a range of conditions? There is a potential downside, as varieties adapted to other geographical regions may be more susceptible to local pests or less attractive to pollinators or flower at a slightly different time for example.

One approach may be to grow a mix of varieties in the hope that one will do well and save seed from that, or even let them cross with each other. That’s not a daft as it sounds. I have been following an exciting breeding programme called Wakelyns population wheat – it’s not a single variety wheat but the result of the careful cross breeding of several varieties, which were then allowed to cross again and again. A field of population wheat looks very different to one of a carefully bred cultivar –  it’s not uniform but varied; some tall, some short, some with heavy ears, others with small ones and there’s a mix of characteristics that you can’t see – disease resistance for example. The idea behind population wheat is that some of the plants will cope with the conditions, so the crop will never produce the highest yields or be completely disease free, but you should always get a crop and if disease turns up, some of the plants may succumb, but not all of the crop. It’s a great idea that’s gaining traction as its helping farmers to adapt quickly to climate change. What is key to its success is repeated seed saving. You don’t want to keep breeding the same, as conditions change. If a new strain of yellow rust emerges, you want to select seeds from plants with more resistance, but in a few years, you may be selecting for a different strain or even a different disease. You need your wheat population to be dynamic and adaptable.  And the idea of populations is spreading to population rye and others.

In our climate-changed world, we will need to be adaptable. Much as we like to select for flavour, yield and appearance, it may be more important to opt for resilience to drought, high temperatures, waterlogged soils etc. We may need to create new varieties, rather like the Victorians. And there is still an important role for heritage seed libraries with the array of varieties that we can use as the starting point and diversity in our breeding programmes.

Going forwards, I think I am going to have to look for resilience and diversity and create my own population parsnip, beetroot and pea etc … watch this space!

Some parsnip and population resources

Info about some of the different varieties of parsnip seed

An article in Organic Farming around Population Wheat