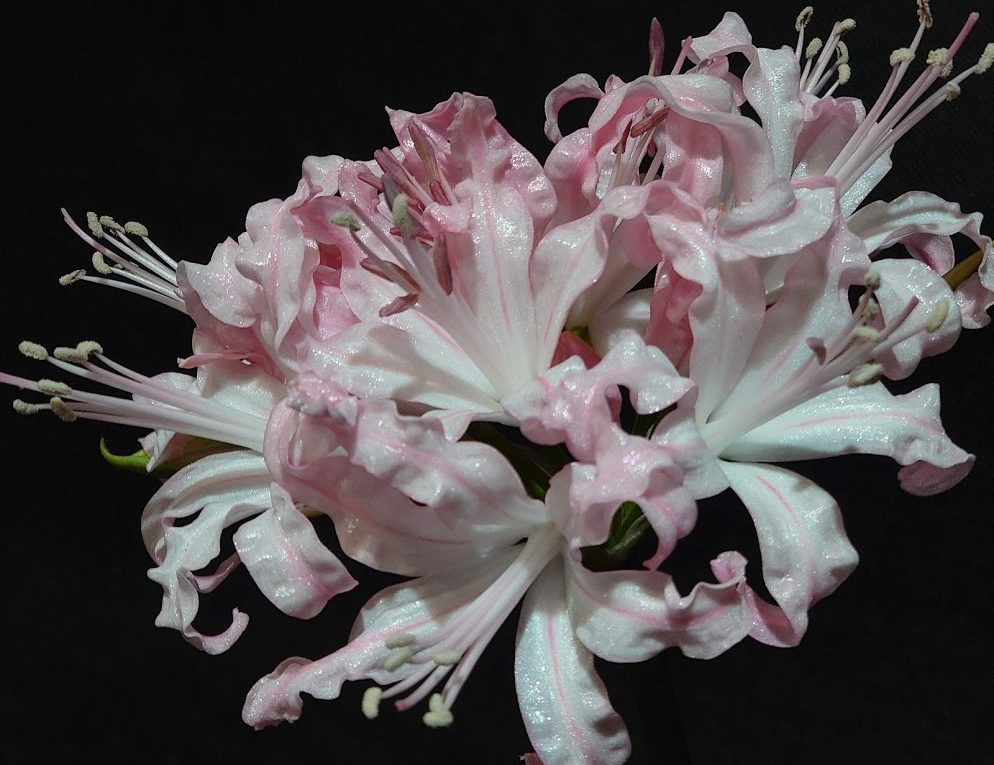 I’ve kept a couple of pots of nerines for some time, but didn’t really know much about them, so I grabbed a chance to visit the Nerine Exhibition at Exbury Gardens in Hampshire along with fellow Garden Media Guild members.

The jewel lily (Nerine sarniensis) is a truly flamboyant plant and aptly named as its petals sparkle in the light. As you can see from my photos the petals almost look fake, with their shiny and reflective surfaces.

These nerines come originally from South Africa where they are found growing in the mountainous habitats of the Cape Province. Once discovered, they were bought to Europe in the 1600s where they were grown in Guernsey and became known as the Guernsey lily. The nerine is a typical Mediterranean plant – the bulbs lie dormant over the long, hot summer and then flower in autumn.

The wild nerine has an orange flower, but years of plant breeding at Exbury has created a vast array of colourways, range from the orange to pink and white through to dark red and purple. The petals vary too – some smooth and others crinkly.

We were lucky to be taken behind the scenes and visited the huge glass house that houses the collection. The hybrids are all arranged in A-Z order. They are also graded according to quality of flower and regularly re-assessed.

There’s a quirky naming system in place at Exbury. The plants with pink and white flowers have female names, the red have male names and the dark red ones have macho male names! Mauve flowers have South African names, mostly based on desert areas in South Africa and Namibia. Purple flowers have pharoanic names, while the eye-catching bronzes are named after volcanoes.  It was fun to read the names and guess the colour.

Nerines are long lived, so some of those on display at Exbury are 50 to 70 years old. However, unlike Nerine bowdenii, Nerine sarniensis is not hardy, so must be overwintered a frost-free place, but other than that they are really easy to keep.

Choose a multipurpose #peatfree compost and add some sand and grit. You don’t need a large pot, a 10 cm pot will be fine for a single bulb. When planting several bulbs in one container, plant close but not touching with neck of bulb above the surface.

Keep the bulbs dry during the dormant period (April – August) and then give the bulbs a good soak at the end of July and leave dry again until September.  Start watering again in September and October when the flower spike emerges, which is followed by leaves. Make sure the pots are damp but not wet. Fed every 14 days with tomato feed and keep frost free. Stop watering when foliage yellows and dies down. Repot every few years. The best time to do this is just before just regrowth gets under way.  One risk for nerines is a virus that spreads easily, especially if you cut off dead flower stems with a knife – the advice is to pull it out.

And there was one lily that interested me as it was hardy so great for the #climatechangegarden. This was the #amarine, and as the name suggests, it’s the result of a cross between an amaryllis and nerine. They had been thickly planted along a hot, well drained border beside a glasshouse and they looked fabulous. Amarines grow quickly too, are great for late autumn colour and they like being in clumps rather than grown singly.

Nerine sarniensis is not hardy, but Nerine bowdenii is and can be planted in a sunny sheltered position with well-drained soil such as the base of wall. Nerine undulata can be grown outside at a pinch, but it flowers from November to December, so may be damage by bad weather.

And finally – there has been much discussion on plastics in horticulture and we have been encouraged to bin plastic for more sustainable materials, but guess what?  Nerines prefer plastic! They produce far better root balls in plastic pots compared with clay or ceramic – who would have guessed?

There is still time to see the nerines as the Exbury Nerine Exhibition until 3 November in the Five Arrows Gallery at the gardens. Not only with he nerines be in full bloom, but the autumn colour will be fabulous  www.exbury.co.uk

You can buy nerines online from nerines.com, the website about the nerines at Exbury. Money from the sales of bulbs goes back into the upkeep of the collection.