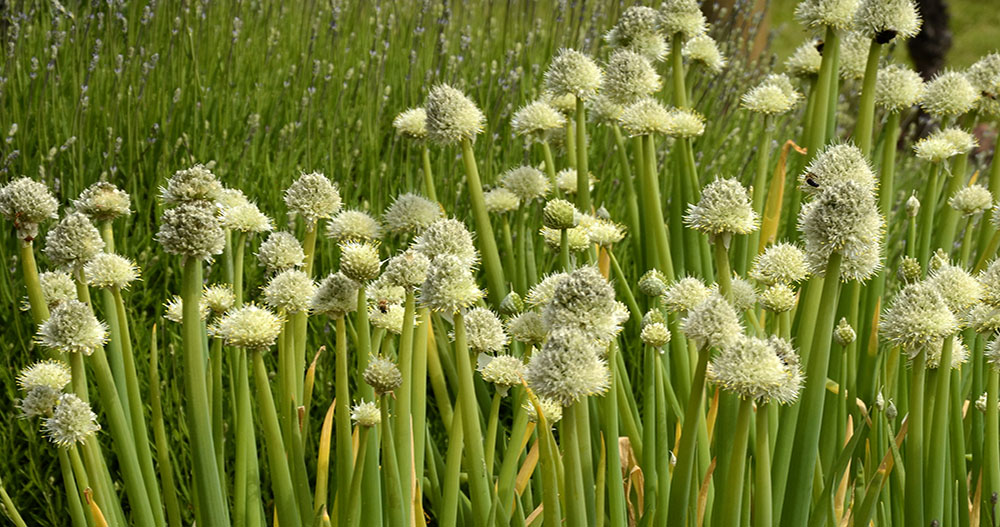 In this series of blogs on unusual vegetables I am looking at some of the quirky veg that I grow on my plot. I had a count up and I think I grow 50+ unusual types, so I’ll cover most of them in this series.

I love perennial vegetables as they save so much time – no need to buy and sow seeds, transplant etc. Just plant them once and enjoy for many years. And it not just time saving, the soil benefits too. There is far less disturbance which is good for soil life, a layer of fallen leaves to boost soil organic matter and water retention, roots that grow deep in the soil and bring up minerals. I am kicking off the series with perennial onions. so here are a few to think about.

I grow a number of unusual onions and my favourite has to be Babington leek (Allium ampeloprasum var. babingtonii) for its fabulous flower – so bizarre. This hardy, perennial leek is a native that you can find growing wild, but is now available via a number of specialist nurseries (see list at bottom). Its closely related to the elephant garlic with its long strap leaves. This is a clump forming plant, so leave it alone for a few years to let it bulk up. You can harvest the stems from late autumn to early spring by cutting off above the bulb which lies deep in the ground, so it can regrow. The plants die back after flowering so don’t worry if they disappear! They haven’t died, they are just dormant over summer and then fresh growth appears later in the year. To get more, you can let them multiply or collect the bulbils, which is dead easy. You can see from the photo that the flowerhead forms a mass of bulbils which you can collect and plant out. Then you have loads! The only issue I have with my plants is that they are prone to rust which is unsightly and reduces the number of shoot available for use. It can impact on the number of flowers the plants produce.

Its interesting how many annual leeks can be left in the ground rather than harvested as they will flower, die back and reappear the next year. I have several clumps of leeks that are perennial. Why not try this with some of your leeks? They have the most gorgeous flowerheads that compete with the best ornamental alliums. In fact, leaving your leeks in the ground is much cheaper than buying ornamental allium bulbs!!

These onions Allium x proliferum also go by the name Eygptian, topset or tree onions. They are a type of bunching onions, like spring onions, as they do not form a bulb. I first saw walking onions in the wonderful kitchen garden of Monticello in Virginia, USA. There was the most fabulous bed of walking onions and I took some great photos on film – which I really must scan. It was here that I was introduced to the idea of perennial veg too. So back to the onions. In late spring the plants put up a long stalk with a cluster of bulbils (sets) at the top, hence the name top setting. As the bulbils swell and get heavy, the stalk bends, dropping the bulbils to the ground where they can roots and get established. This way the onions ‘walk’ across the bed. Its easy to pull off the bulbils and pot up or use them in cooking.. These onions are at their best over winter and spring when you can pull off the leaves to use as chives.

The Welsh onion (Allium fistulosum) is also called scallion, spring onion, salad onion, Japanese bunching onions. Its a hardy perennial enjoying a well drained fertile soil. I plant clumps around the kitchen garden, in corners of the raised beds. Like the other perennial onions, let it clump up before you start taking a harvest. You can pull up a whole plant or just trim off some leaves, You can use the onion in the same way as a salad onion, although they can be a bit tough and strong-tasting, Alternatively chop and cook as a traditional onion. The flowers are great for attracting pollinators. After flowering they die back and new leaves appear in late autumn and winter. These can be sown from seed very successfully.

As well as the four described above I have potato onions (Allium cepa Aggregatum), a type of multiplier onion with an odd triangular-shaped bulb, Rakkyo or Chinese scallion (Allium chinense) which is a small, delicate plant with purple flowers, and the Everlasting onion (Allium cepa perutile) which is smaller that the Welsh onion and doesn’t flower.

Fortunately there are more suppliers for these unusual onions than in the past, but they are not available all year. Best time is spring and autumn. The easiest way to establish the onions is by buying bulbils in late summer / autumn, These are suppliers that I have bought from over the years and can highly recommend.

Pennard Plants Somerset, a few miles from me. I have bought many of my perennial edibles from Pennard Plants. They have a wide range of unusual edible alliums in their catalogue which can be bought online.

Edible Garden Nursery Devon A wide range of alliums and other edibles.

Backyard Larder Alison has a small selection of perennial veg on sale, which varies through the year and an informative website.