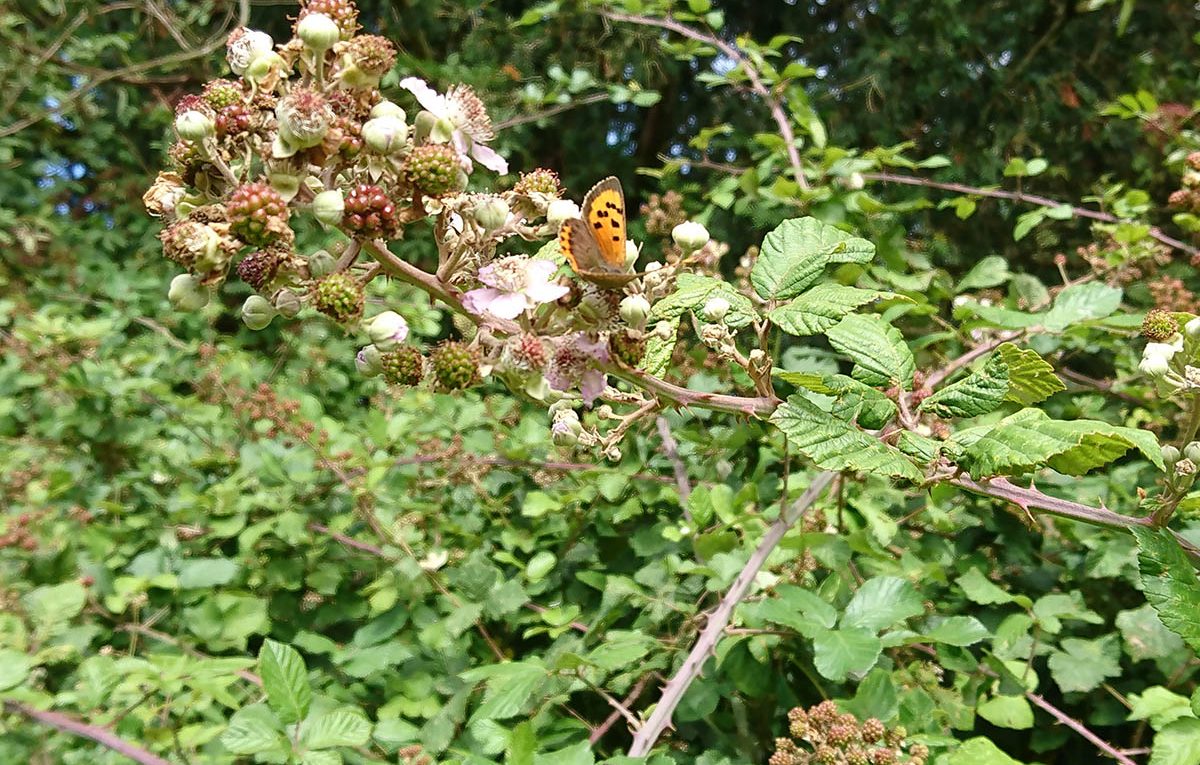 Its  #bigbutterflycount time  – walk for 15 minutes and record the species and numbers of butterflies that you see  (https://www.bigbutterflycount.org). It’s something I do every year, but this time butterflies have been badly hit by the drought. In fact, insect life is pretty poor at the moment. I can walk along our  hedgerows and hardly see anything with six legs, so its all very depressing.

Normally  when I walk our fields at this time of year clouds of meadow browns lift from the margins while our hedgerows are buzzing with insect life.  Not so this year. Our hay was taken in mid June, and little grass has grown back.  Even our late cut meadow is yellow and the flowers are over.  Around our pond we have loads of knapweed, which pulls in the marbled whites in large numbers,  but this year I counted just two or three on wing and they appeared very early, in  mid June, so are no longer around. Just as well, as the flowerheads are shrived.

Today’s  butterfly count – 4 small whites, 2 meadow browns, 1  speckled wood, 1 small copper.  The smallest I think I have ever recorded. I have seen large whites, green-veined whites, red admiral, peacock, comma, common blue, and brimstone in recent days,  but only one or two. No small tortoiseshells yet.  No caterpillars on our nettle patches.  There were very few bees to be seen and no hoverflies, but it’s not really surprising, there is hardly anything in flower. And this is where the title of this blog comes in. The only flowers in abundance at the moment are willowherb (Chamerion angustifolium) and bramble.  There is some bindweed, corn marigold, horseshoe vetch in flower,  plus some thistles that I have let flower against my better judgment because they are nectar-rich, but nothing else of note.  Fortunately, I have flowers in the allotment area and gardens, but the fields are virtually devoid of any flowers. Just as well I don’t cut my hedgerows very often as I wouldn’t have had as many brambles in flower.  Like many other flowers, the brambles are early and I’m already picking fruit, so in a week or so the remaining flowers will be gone. Just have to hope we get some rain and the second flush of clovers and dandelions appears. I’m not sure what the honey harvest has been like this year, there was probably a bumper June when friends reported lots of activity, but now beekeepers must be worried.

Going forwards, its clear that this type of weather may become more common so we will have to think about how to supply our pollinators with nectar in mid summer.For me it may be a crop of sunflowers.

I love #bughotels and l'm always on the look out f

Ready steady cook! Ingredients for the next meal

The new compost pile - 🐕 for scale. We've been

Rainbow chard - such a photogenic veg as well as b

It's that time of year when you need to think ahea

Today my post is all about biochar. I’ve used #b

It's mid November and so mild that many flowers ar

Autumn toadstools - I love the way these transient

My perennial black kale - yes you read that right