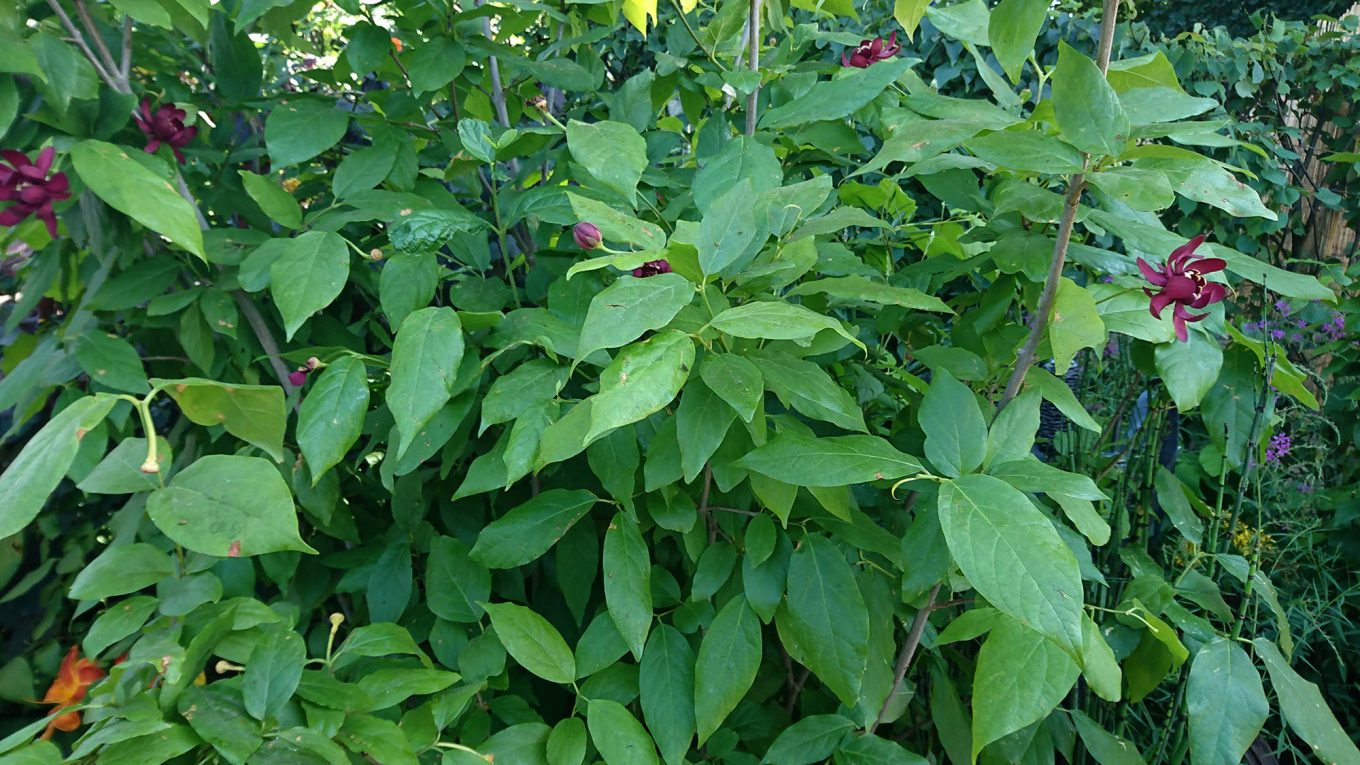 Showing its socks off in a shady corner of the Grow Your Own garden at RHS Hampton Court 2018 was an attractive shrub with magenta flowers and spicy fragrance. Judging from the number of visitors asking about its identity, it was not a well-known plant. It was a hybrid Carolina allspice, Calycanthus x raulstonii Aphrodite.

Carolina allspice (Calycanthus floridus) is not new to me as I grow it in my perennial spice bed.  My specimen is still quite young, but it flowered this year and is putting on good growth. It’s native to the Eastern United States (Florida north to New York state, including the Carolinas ) where it grows in the understorey of deciduous woodlands. It was grown by early colonists in their gardens and imported to the UK in 1756, but despite its long history in our gardens, it’s still relatively unknown.

But the bit of its biology that fascinates me, being a botany geek, is the fact that the flowers are pollinated by beetles. Pollination by beetles, or cantharophily, is relatively rare in the plant kingdom.  That’s because Calycanthus, like its relative the magnolia, is a pretty primitive flower plant that evolved before winged insects first appeared. Critical to the successful pollination of its flowers is the spicy scent which it a beetle attractant. In fact, one research dissertation from 1975 found that some of the oils mimic the odour produced by fungi that is much loved by some of its beetle pollinators [ref McCormack, Jeffery Holt: Beetle pollination of Calycanthus floridus L. Pollinator behavior as a function of the volatile flower oils].

Just like the magnolia, Carolina allspice has a flower with the undifferentiated sepal and petals (tepals) arranged in a spiral.  The scent is produced before the flower opens fully, forcing the beetles to squeeze between the tepals to reach its source, and once there, rub pollen from other flowers onto the stigma. The beetle is held captive within the flower for several days until the anthers are mature. Then flower opens, allowing the beetles to scuttle away with their load of pollen to other flowers.  Beetle-pollinated flowers are known for their spicy fragrance and they include the close relatives Wintersweet (Chimonanthus) and the Ribbon tree (Idiospermum australiense).

Caroline allspice grows to about 3m high with a similar spread and is pretty easy to grow as it tolerates most soils and growing conditions – full sun to shade, heavy clay to light sand and it can even put up with a fair amount of wind.  It’s hardy to -15C and possibly more, so no concerns about this species surviving hard winters.

Both the flowers and foliage have a spicy fragrance, hence the name sweetshrub and sweet bubbies. Some articles refer to the traditional use of the dried flowers in drawers to keep linen smelling fresh, a forerunner of the modern pot pourris, for which it is a good candidate.  The plant is also used as a traditional medicine by Native Americans, while the oil from the flower is an essential oil in the perfume industry. I grow it as a spice as its bark can be used as a substitute for cinnamon. Simply cut off some woody twigs and let them dry out naturally in the sun. Then peel off the bark which is can be used as a cinnamon-alternative. But bear in mind that the flowers and seeds are poisonous.

The genera Calycanthus and Sinocalycanthus belong to the small family of Calycanthaceae in the order Laurales. There are three species of Calycanthus: C. floridus, C.occidentalis growing in the western half of the United States and C. sinensis from China. There are also a number of hybrid allspice plants based on Calycanthus and Sinocalycanthus, which are the ones I saw in the show gardens. Their flowers are larger than the regular allspice plant and they are good for attracting butterflies. The flowers range from rust brown to dark red, but there are also cream white and yellow cultivars. One of the better known hybrids is Calycanthus x raulstonii ‘Hartlage Wine’, a rare and quite expensive plant, so expect to pay £25-30 or more for a decent specimen (listed by Hillier, Crocus, Burncoose).

So definitely something for the edible garden – eye-catching, fragrant and useful.