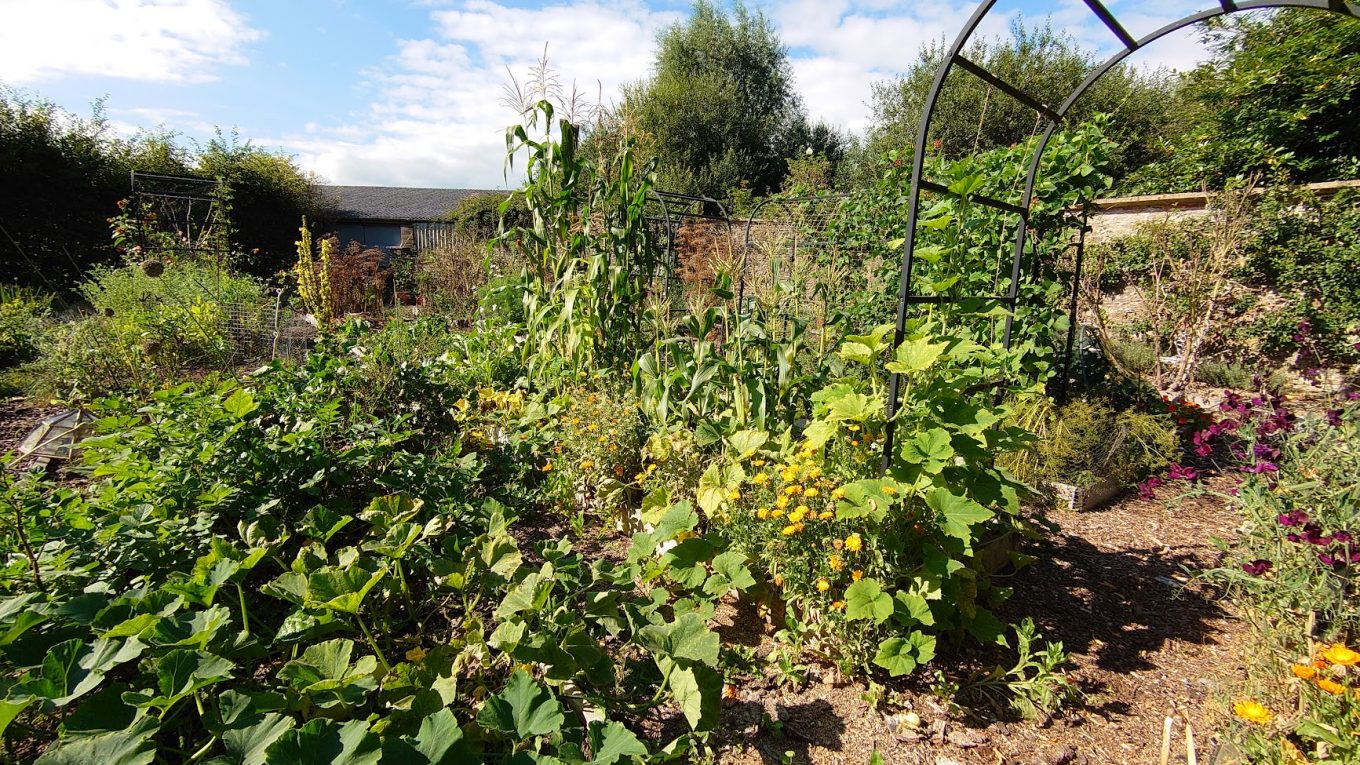 As a new gardener many years ago, all the books I read described growing vegetables in a rotation with neat, weed-free rows.  But over the years, I have moved to a polyculture approach in which I grow a number of different crops in the same bed, rather than have whole beds of one crop which are rotated each year.  When you mix up the crops, it’s more difficult for pests to locate their host plants and disease to spread. I like to grow flowers amongst my veg to create a vegetable growing area that has a cottage garden look. There is more biodiversity too which is great for your garden ecosystem.

Its easy to start a polyculture bed.  I am going to adapt the Three Sisters method used by Native Americans to grow corn, beans and squash. Mostly the seeds are sown into modules first and the young plants transplanted into position in late spring, once risk of frost has past.

The sweet corn are planted as a block in the centre of the bed because they are cross pollinated and need to be close together. Plant a few sunflowers and squash between the corn. The squash will scramble across the ground, shade the soil and help to keep down weeds. Then I plant rainbow chard around the edge of the bed for edible leaves and a splash of colour. Radish is sown direct into the soil to fill the spaces while the sweetcorn and squash are still small. Once the sweetcorn is established, I sow seeds of climbing French beans at the base of the stalks. The sweet corn provides support while the beans fix nitrogen. Finally, French marigolds and nasturtiums can be planted between the chard to bring in pollinators and natural predators.

I make good use of vertical spaces too, using arches to link beds, over which I grow more climbing French beans and squash.

To help you create your own polyculture bed, I’ve put together some organic seed suggestions from the Organic Catalogue. They are  French breakfast radish, Uchiki squash, Blauhilde French beans, Rainbow chard, Damaun sweetcorn, Dwarf French marigold, Paintbox nasturtium, and Red sunflower. You can read more about my book here.

4 thoughts on “Create your own polyculture bed”