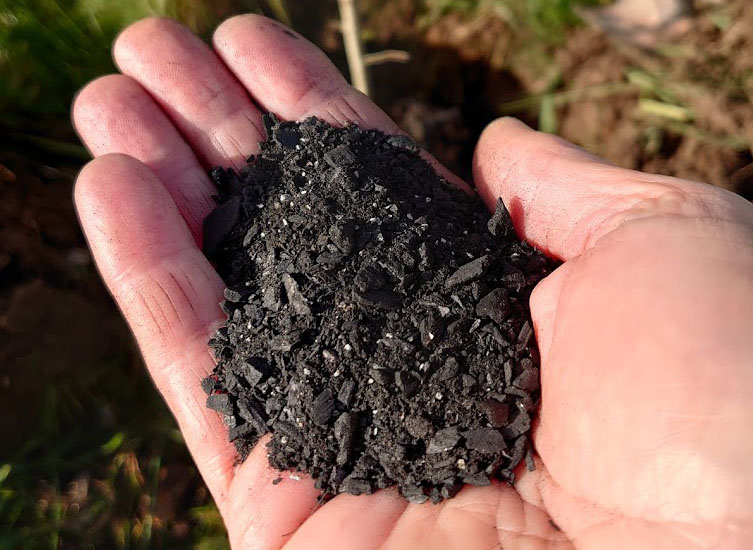 I’ve used biochar for many years after seeing the results of horticultural trials where it was mixed into potting compost. Seedlings grown with added biochar had healthy shoots and a better root system compared with those without.

My own very simple trials in which I have compared the germination and early growth of seedlings in #peatfree compost with and without biochar showed similar results (see below).

Other trials have found that bare rooted fruit trees with biochar mixed into the soil around their roots had near 100% establishment success. So today I use biochar in many different ways in my garden.

Biochar is a charcoal powder that is used as a compost or soil amendment. Its long been used around the world by indigenous peoples. In rainforests, the soils are thin and relatively infertile as the high rate of growth of the trees means that any nutrients released by the leaf litter are soon mopped up by the roots of trees and other plants, while the heavy rainfall means that any soluble nutrients are washed out. As a result soil used to  grow crops is nutrient poor and lacking in organic matter  so these early growers learned how to use biochar as a soil amendment. They placed plant matter and animal bones in trenches, covered it with soil and let it burn slowly in low oxygen conditions to make a charcoal. This amendment helped to create beautifully fertile soils. Similar processes were used in China and Japan

Its similar to charcoal which is also made without oxygen from wood and then used as a fuel, a medicine and a drawing medium. Its long been added to soil too, as it was a waste product from the kilns. We can find use of charcoal powder in UK gardens going back hundreds of years.

Today, biochar is sold as a soil amendment. It’s made using pyrolysis; that’s burning at high temperatures without oxygen to create a black material that is rich in carbon. It looks solid but it’s filled with lots of microscopic holes so it’s porous and rigid – one gram is estimated to have the surface area of two tennis courts.

When mixed into soil, biochar has many useful benefits:  it improves aeration, reduces the risk of compaction and holds on to soluble mineral nutrients so there is no leaching. Soil microbes shelter in the particles and hide from larger predators, so the number of beneficial fungi and bacteria in the soil can be 10 times more than soil without biochar. One property that is important for a climate change garden is biochar’s ability to hold on to water. Water seeps through the honeycomb of holes and does not drain away, boosting the water holding capacity of the soil.

I use biochar in a number of ways:

Biochar can help efforts to counter climate change too, because the process of pyrolysis locks up carbon so there is less carbon dioxide, compared with burning plant biomass or leaving it to rot. In fact, the formation of one tonne of biochar from wood removes three tonnes of carbon from the atmosphere.

Its often called black gold – and in the garden, it is just that.