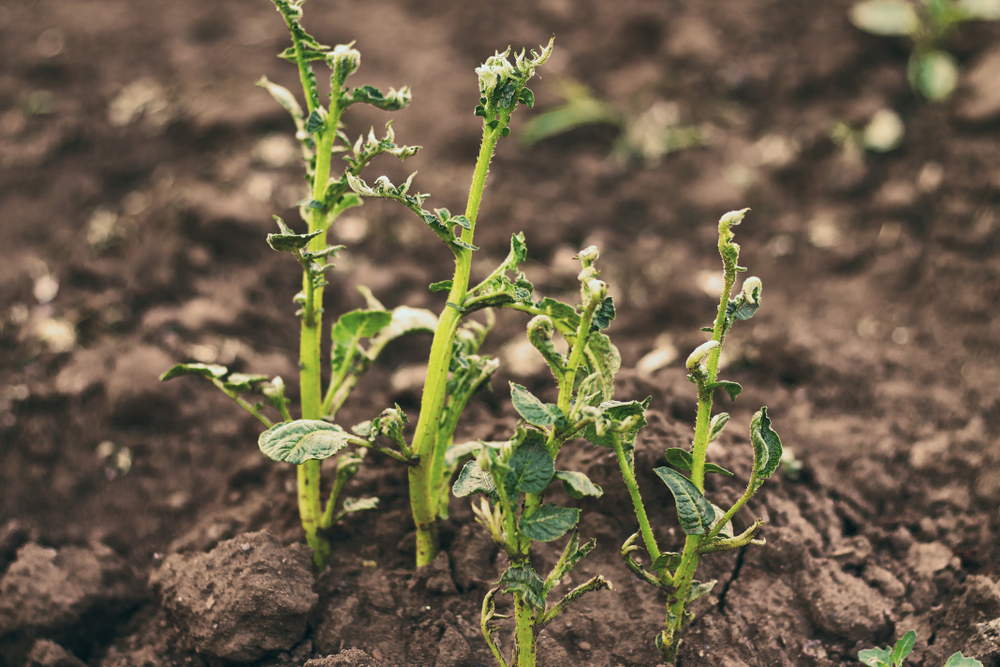 Lockdown sent people into their gardens. They have spent hours nurturing their green spaces and while garden centres remained closed, the online suppliers of seeds, compost and other gardenalia were deluged with orders. We saw a shortage of loo rolls, hand sanitisers, eggs, but who would have guessed that compost would be in short supply too – strange times indeed.

For many of these new gardeners, being able to  grow their own vegetables was the highlight of their year, so imagine their disappointment when their carefully nurtured crops failed to grow – instead of producing lots of lush green growth, leaves were curled and twisted and failed to flourish. Many blamed their lack of experience, their watering regime, aphids but I don’t think many questioned the compost. Why would they?  Who would blame the compost?  Its not one they made themselves, but a bagged compost manufactured by an expert horticultural company.

For those of us with more experience, compost might have been the top culpri. We read about the disappointment of many last year, including that of #nodig expert #CharlesDowding who suffered poisoning when he used some contaminated horse manure.  Most sensitive are potatoes, tomatoes, peas and beans, and flowers such as delphiniums and phlox. The symptoms include distorted pale shoot tips, fern-like growth and generally stunted plants that don’t get going. Grasses, cereals and sweetcorn are not affected though.

And now I read on Sara Venn’s instagram (@saralimback) account of contamination on the Speedwell Allotments in Bristol. They used a variety of composts to fill their beds, but on one they used a well known brand. Soon after, they noticed the leaves of the tomato and beans started to curl – tale tell signs of aminopyralid poisoning. The compost and plants were replaced but as Sara writes: “We would have been harvesting tomatoes weeks ago without this, and wouldn’t have lost the lot, and we also lost over 150 bean plants. And all these crops were going to refugees and asylum seekers – people who are disproportionately affected right now by poverty”. They received a refund, but this doesn’t make up for the loss of the crops.

I am sure the manufacturer did not deliberately sell contaminated compost to unsuspecting gardeners (sorry I cant mention the brand), But there is a problem when compost manufacturers use farmyard manure and green waste as a base for their compost and that’s aminopyralid and clopyralid contamination.

What is the poison?

Aminopyralid and its close relative #clopyralid are nasty hormone-based weedkillers manufactured by Corteva  (a trademark of Dow AgroScience ). Typically, farmers use these weedkillers are pasture to kill the broad-leaved weeds and leave the narrow-leaved grasses untouched, Its also used by land managers on amenity grassland such as motorway verges, railway embankments and industrial areas to kill deep rotted perennials and woody weeds. The safety guidance for this chemical says that any hay or manure should not enter the compost chain.

These are persistent chemicals, so much so that they remain in the plant matter even after it has passed through the digestive system of a cow or horse and contaminate their manure! Hence the problem that Charles Dowding experienced when he used some horse manure.

But gardeners aren’t without blame.  Clopyralid is an active ingredient in many weedkillers licenced for use on lawns. So those gardeners who love a pristine, weed-free lawn will use this type of weedkiller as it kills the weeds but leaves the grass. Perfect! But if gardeners treat their lawn and put the clippings into their green waste collection and its taken to an amenity-composting scheme it could end up in garden compost. I have even heard gardeners say that they don’t want to put the treated clippings in their own compost, so they put them out in the green waste collection instead!”

It’s great that local authorities collect green waste  and recycle it back as compost for use in gardens. This would otherwise fill up our landfill sites, so I am all behind the schemes. But there is a real worry that contaminated grass clippings end up in the green waste.

What to do with contaminated compost?

So what do you do if you have some contaminated compost? Well, whatever you do, don’t put it back in the green waste collection, you will only perpetuate the problem and possibly cause disappointment for others.

So, if you have some contaminated compost, keep it separate. Mix in some soil or your own compost and let all the microrganisms work on the compost for the next year  – they will break down the chemicals for you. To test its safe to use, do a test sowing using plants that are sensitive to aminopyralid – peas and beans for example.  If they grow OK, its safe to use.

As regular readers of my blog will know, I campaign for #peatfree composts. While some #peatfree compost manufacturers use bracken, wool, coir and wood in their composts, many of the large volume manufacturers use a percentage of green waste. So, this continuing saga of poisoned composts really worries me, for it may put off gardeners from choosing the peatfree option if they think it contains green waste and may be contaminated. What would you choose: a #peatfree that may contain aminopyralid or an aminopyralid-free compost that contains #peat?

So, I really hope that the social media reporting of contamination in this leading brand may mean that the horticultural companies is a wake up call and they actually do something to get these horrible chemicals banned.

If you want to learn more watch Charles Dowding’s excellent youtube video on ‘Identifying problems caused by aminopyralid residues in hay and horse manure’, based on his trials and his first-hand experience of having had some contaminated horse manure.

What products to avoid

Clopyralid in used in a wide range of weedkillers for lawns including  Weedol, LawnClear 2, Roundup Lawn Weedkiller as well as in SBK Brushwood Killer. There is information regarding active ingredients in weedkiller in this list by the RHS

I find it really disappointing that clopyralid was deregistered for use on domestic lawns in the USA in 2002 but its still used in consumer products in Europe with some safety guidance. In the UK, the safety guidelines for aminopyralid say that any treated grass or hay should not be composted or enter the compost chain.

Since 2019 and the furore around the aminopyralid contamination reported by Charles Dowding and others, there has been some work behind the scenes – Garden Organic, the Soil Association and Organic Growers Alliance have been working with Corteva, the manufacturer and distributor of the poison  – these organisations want a solution to the problem, Gareth Morgan, Head of Farming and Land Use Policy at the Soil Association said: ‘We encourage growers who think they may have been affected to contact the government’s Chemical Regulations Division. As part of the Health and Safety Executive, CRD monitor contamination incidents – which still occur despite their clear warnings to users on how to use aminopyralids.  We think it is simpler and more effective if growers send an email to both CRD and Corteva.’

If you think your plants have been poisoned, emails should be sent to CRDEnforcement@hse.gov.uk and UKHotline@corteva.com, headed ‘Aminopyralid contamination’.

Sign the change.org petition to get the aminopyralid banned

One thought on “Aminopyralids and killer compost”