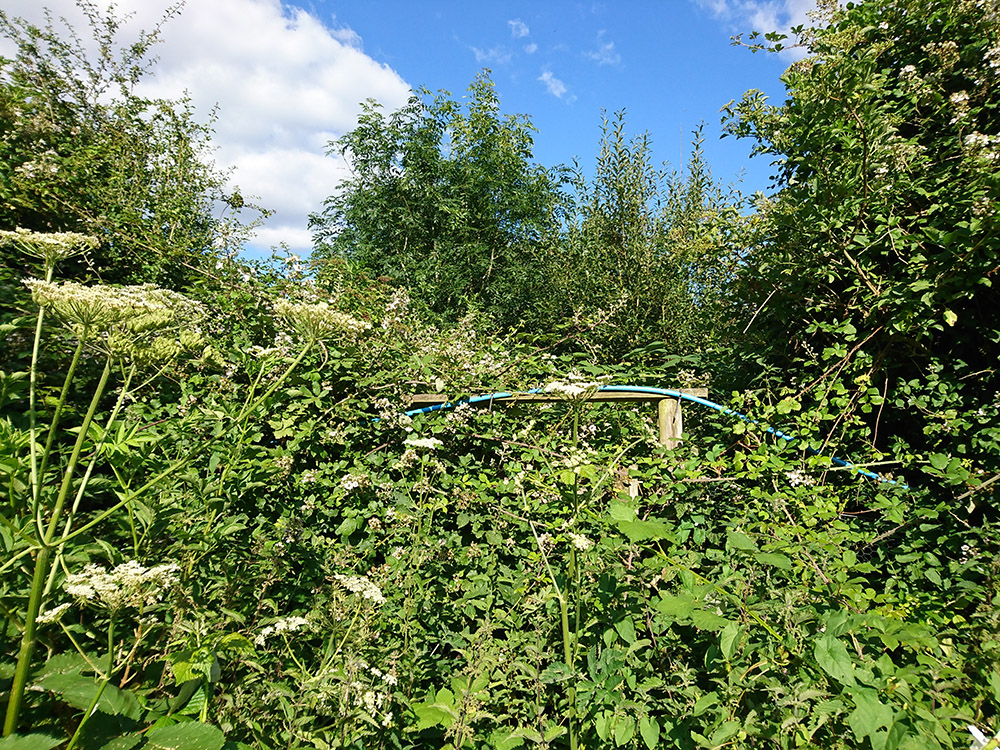 Coming back from the one-acre plot the other evening, I noticed a comma butterfly flitting around an overgrown patch of brambles festooned in flower. Stopping to watch, I was mesmerised by the sheer wealth of insect life in this sunny corner. The comma was decidedly feisty, chasing off all comers – a red admiral, a peacock, then a skipper, cabbage white and meadow brown. From its behaviour, it’s likely the comma was a male defending his territory, sitting on a perch and watching for a female to pass by. And as I stood in one spot, transfixed on the scene in front of me, a gatekeeper fluttered past my feet and finally a speckled wood.

But it wasn’t just butterflies that were lured by the bramble flowers, There were bumblebees and honeybees, hoverflies, parasitic wasps, and a host of other small insects that I couldn’t put a name to.

One of the reasons bramble or blackberry (Rubus fruticosus.) is so valuable for attracting pollinators is its nectar. The flowers start producing nectar before the petals open and the flow continues until the petals fall. And the quantity of nectar is astonishing, between 3.7 and 19.5 mg per flower and interestingly, the more flowers in bloom on a plant, the higher the level of nectar production – so no wonder my wild corner was a buzz. [There is a fascinating paper on the flowering and nectar secretion of Rubus fruticosus written by M.S. Percival in 1946: https://nph.onlinelibrary.wiley.com/doi/pdf/10.1111/j.1469-8137.1946.tb05048.x ]

For many, this overgrown patch of bramble behind the covered yard is a bit of an eyesore and should have been given the strimmer treatment, so it looked nice and tidy. But we’ve let the brambles take a hold and every summer they reward us with their blossom that is such a magnet for pollinators. And this is followed by a harvest of fat and juicy berries. Its one of the many ‘re-wilded’ patches on the farm that are so important for biodiversity.

And it wasn’t just the bramble that was drawing in the insects tonight. A few metres away is a buddleia that is laden with flowers this year. Oddly, it wasn’t covered in butterflies as you would expect, but with bees and bumblebees. However, I did spot a small white and small tortoiseshell, so that bought my butterfly species count to 10 – not bad for a 20-minute wildlife safari just metres from my back door.

One thought on “Butterfly corner”