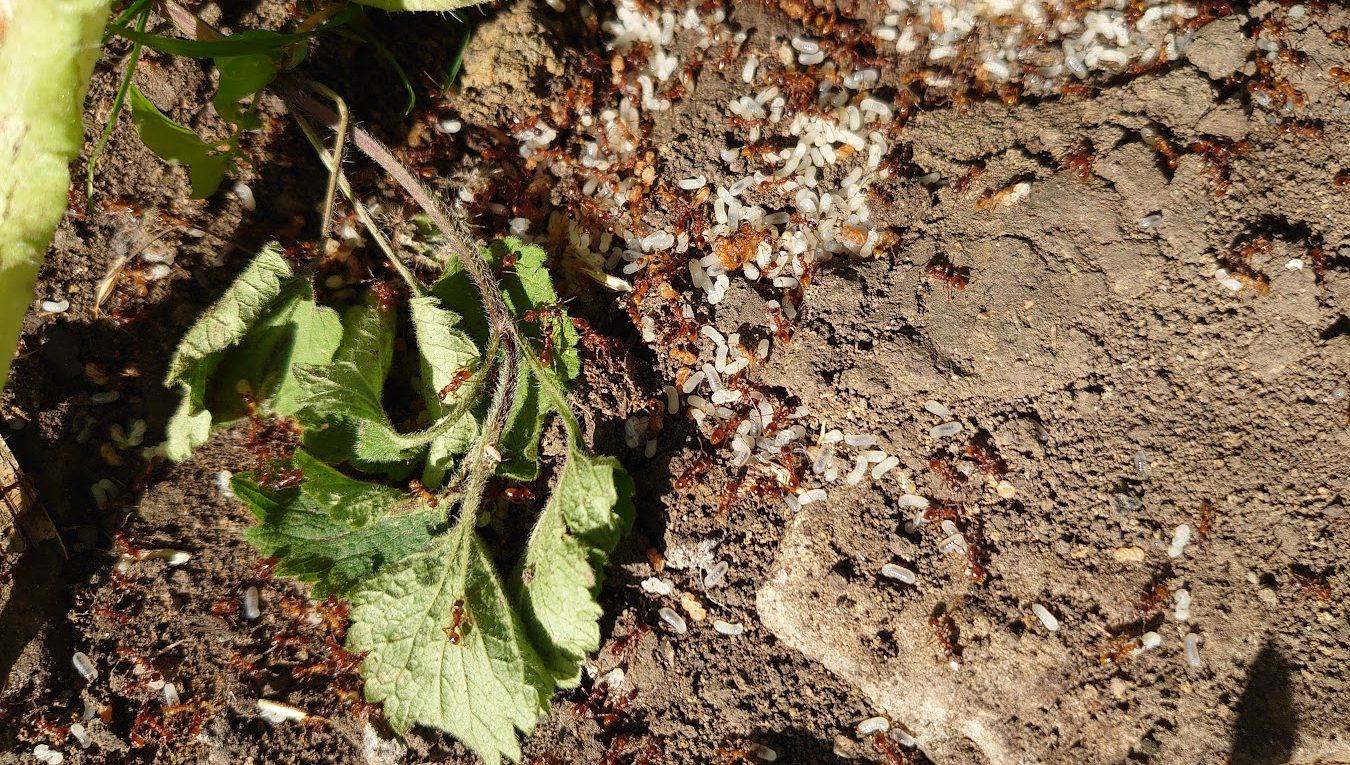 It’s been a summer of ants and I am not just thinking of flying ants that appears on balmy summer nights. No, I am thinking of those evil red numbers that emerge from the ground and swarm over your gloved hands and feet while you work. They bite with their pincer-like mandibles and, once attached to your skin,  you have to pull them off as a flick with the fingers is not enough.

It’s a shame that I have this love-hate relationship with ants as I find them fascinating creatures. Take the leaf cutters. You see columns of these ants in rainforests, each carry a fragment of leaf on their back – it is a wonderful sight and even more fascinating is the way they have vast underground gardens where they farm fungus, feeding the fungi on the freshly foraged leaves.

And one of my most memorable experiences in a rainforest involved ants. While walking along a track in an Ecuadorean rainforest, the guide stopped and became very excited as he had seen an ant bird!  These birds follow army ants in the undergrowth, preying on the animals that the ants disturb.  As we stood looking, a large black tarantula raced across the path followed by beetles and earthworms. Something was causing animals to run for their life. There was a swarming column of army ants moving through the forest. It was very organised and every so often you could see  an extra large pile of ants pulling their prey back to the nest – grasshoppers, spiders, beetles, small mammals, scorpions and anything else that had the misfortune to be on their path  – the animals didn’t have much of a chance, the ants might be small but there were thousands of them, working together to catch prey.

So, while its fascinating to study ants elsewhere, I am not so happy to find quite so many red ant (Myrmica ruginodis) colonies in my walled garden and the dry weather means there are more than ever this year.  But here’s my conundrum. Much that I would love to remove all the ant nests from my favourite borders, I am reluctant to act because of the value ants bring to the garden:

However.  there are some downsides.  They tend invade my favourite container plants. This year my  lemons, olive and gingers are all showing signs of the presence of ants – yellowing  leaves and wilting, so I have to drench the pots or even stand them in water to discourage the visitors.

Ants are partial to honeydew, so will run up plants looking for aphids, scale insects and other sap-sucking insects to feed on their sugary exudate. To ensure a supply of honeydew, the ants protect these insects from predators which means that they will increase in number.  Blackfly on broad beans is a classic example. Protection from the ants, means that ladybirds can’t predate on the blackfly.  However, I do have a workaround for this particular problem  – I smear vaseline around the bottom of the broad beans, so  the ants can’t reach the blackfly and the predators can come in.

But why has my garden been colonised by so many ants?

Red ants, particularly, like dry conditions and I have a lot of gravel and stone plus some sheets of plastic and board put down to smother weeds and almost without fail, I find a red ant nest underneath. And they may stay in the same place for many years.  I have one flower bed where a red ant nest has bothered me at least 4 years, so it would be interesting to know just how deep it extends into the ground now.

I don’t use chemicals in the garden and I don’t like the idea of boiling water. When I find a nest under a stone, I leave it exposed so predators can find the ants and eggs . I’m also removing some the piles of stone and sheets I have around the garden so there are less places for them to create nests.

Some gardeners recommend diatomaceous earth –  a powder that I use in the poultry houses to deter red mite. When looked at under a microscope, you can see the tiny particles have jagged edges. This means that when small insects, like ants, walk across the powder,  their cuticle is abraded and it loses its waterproofing and the insect dies. So, I may try this on those nests in my pots.  Another possible approach is a nematode that I have yet to try – its Steinernema feltiae and it’s said to cause the ants to move elsewhere, but I am not sure where they would go?

I have to remember too, that by removing nests, I am opening up the garden to incoming winged females looking for suitable nest sites. If there are already established colonies in the garden, the worker ants tend to find and see off any incoming females. But if they are not present, then there is nothing to stop lots of new colonies getting established.

So, for me there is no easy answer to red ants. I suspect the benefits outweigh the disadvantages and I will have to live with them …